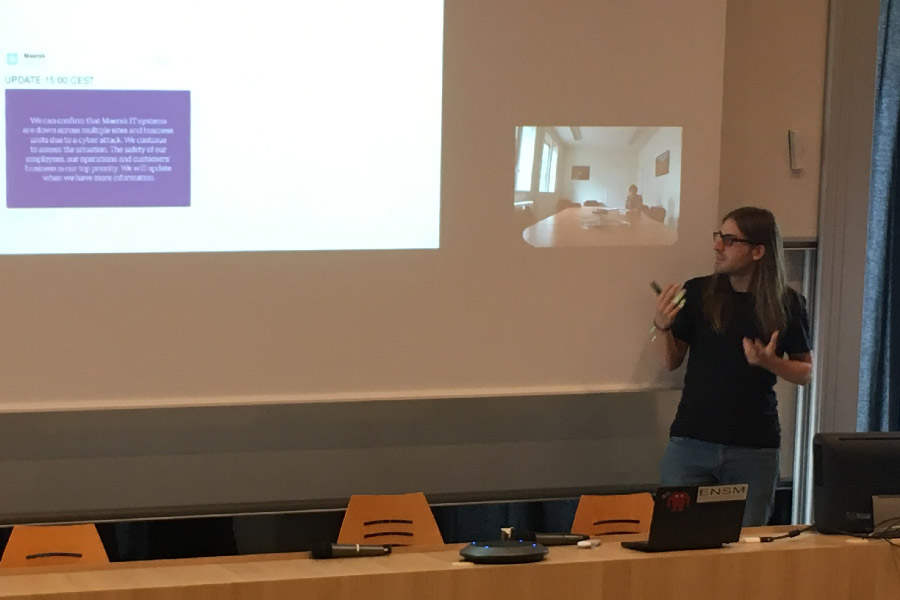 Research at the French Maritime Academy was for a while described as nascent but has now claimed its ambition especially within the human factors, stability, cybersecurity and regulation fields.

The Academy which has trained merchant navy officers since Colbert is sought after for its expertise by prestigious industrial and academic partners. High flying partnerships enable the Academy to consider research as one of its priorities with serious perspectives.

Awa Sam, PhD in laws on the Nantes campus, is part of the Oceanic and maritime law centre and second in command of the working group on maritime drones at the French Maritime Cluster.
The jurist explained that if « the vessel is traditionally a floating craft regulated by French regulations, today, regulation has to rethink this item and integrate in its supervision approach the notion of drone» According to her, « the SEA4M project is the occasion to clarify this legal notion in order to detail the regulations which can be applied using an analysis of the risks linked to the operation of drone in a cooperative mode with a remote management team »

Nils Joyeux, holder of the DESMM, in charge of research at the Academy and working on the Bridge of the Future project, took stock of the PASSION project on the integrated bridge, “the missing link between the conventional bridge and tomorrow’s autonomous vessel”

Laurent Barthélémy who arrived in September 2016 on the Nantes campus, has explained his calculations of unavailability for a pilot floating wind farm. They were presented at the international conference ESReDA on risk and reliability in Nantes in 2018

PhD in IT, Pedro Merino-Laso, former researcher at “Chair of cyberdefence of naval systems” a partnership between École Navale, IMT Atlantique, Thales and Naval Group, is based in Nantes. He presented the cyber risks for the unmanned surface vehicles : the unmanned surface vehicles, USV, have become tools of great interest for carrying out marine missions such as security-safety-surveillance of the EEZ and the protection of sensitive infrastructures at sea-and the ongoing monitoring of the marine environment-scientific et environmental. Because of the critical nature of these missions, the protection of these systems, notably their cybersecurity, has become a major stake. The objective of the Sea4M project is to develop an environment for managing and controlling the heterogeneous fleet of USV so that they are secured against any malicious intent right from their design stage”

Quentin Busch, DESMM, in charge of research at the ENSM, has spoken about the interface Man-Machine of the Sea4M project.

Following the seminar organised in June 2018 in Le Havre by Yann Vachias, research coordinator, Patrice Laporte, ENSM’s Managing Director, welcomed the quality of the presentations and the perspectives, mainly the collaboration projects.
Indeed, François Grinnaert, a lecturer on the Le Havre campus, expert in ship stability and PhD in mechanical engineering, mechanics of the fluids and energy, will be part of the IRENav, Research Institute at the Ecole naval, as a research fellow. Jean-Pierre Clostermann, DESMM, PhD in ergonomics psychology may become part of LAB-STICC which gathers ENSTA Bretagne, UBO, UBS and IMT Atlantique.

Research at the French Maritime Academy integrates merchant navy officers within the end of studies dissertations in collaboration with shipowners and industrials and the future engineers in maritime engineering.

Inclusion in the COP (Contract of Objectives and Performance)
The research and development activity is in good position in the new contract of objectives and performance voted on 21 June 2018 by the Academy’s Board of Directors, which links the ENSM to its appropriate ministry, Ministry of ecology and solidary transition, until 2022.

In 2018, the projects in which the Academy is involved are PASSION, AERONAV, SEAWINGS, E-PANEMA, SEA4M, and OPTIROUTES.

Link to the subjects of students dissertations
Contact the research coordinator : yann.vachias@supmaritime.fr