The Polar Code enters into force on 1 January 2017

The international code applicable to vessels operated in polar waters simply titled “Polar Code” entered into force on 1 January 2017. This code is mandatory according to the SOLAS amendments adopted in November 2014 and those of MARPOL adopted in May 2015. The amendments to the STCW convention on seamen training were adopted last November and will enter into force on 1 July 2018 (figure 1).

Figure 1 : Amendments to the Polar Code

The Polar Code is applicable by all merchant ships and passenger ships over 500 UMS which are operated in polar waters, except by fishing vessels not subject to the SOLAS certification. Besides the Baltic Sea, the regions where the Polar Code is applicable are the Arctic and Antarctic zones above latitude 60° north and south, except, for the Boreal region, a part of the Barents Sea and the south of the Greenland sea. (figure 2).

The code about polar navigation is a set of constraining rules about design, building, equipment, operation, training, research and rescue, and the protection of the environment. It includes mandatory measures concerning safety and the prevention of pollution, as well as provisions deemed to be recommendations for the last two parts. The flag states will be in charge of implementing the IMO Polar Code as well as the port states in certain conditions.

To be in compliance with the Code, a polar navigation certificate delivered by the flag state will be demanded for all ships operated in polar waters and will have to match one of the three classes mentioned in the Code (figure 3). Category A and B vessels are generally vessels designed for ice navigation, those of category C are vessels operated in all waters.

Figure 3 : Polar classification categories with the equivalence of the international Association of the Classification Societies

To be able to sail in the polar zones as defined by the Code, it not necessary for the ship to be built with a reinforced hull but it will have to comply with the Polar Code requirements. The vessel will have to provide the following documents:
– A report stating the vessel’s operational assessment according to the potential dangers encountered on the basis of the sources of dangers as listed in the Code,
– An « operation guide in polar waters » giving information on the vessel’s operation capacity and limitations in the conditions stated in the assessment report,
– A list of additional equipment to be installed in order to comply with the Polar Code and which must be fully operational at the polar service temperature as defined for the vessel,
– An intact stability calculation which includes a tolerance to icing according to the vessel’s polar category and a calculation of stability after damage for category A and B vessels ,
– A certificate for vessels operated in polar waters delivered by the Administration,
– A form listing additional equipment to meet the Code’s requirements,
– The international certificates for the prevention of pollution (IOPP, SOLAS certificates) and MARPOL, for navigation in polar zones. 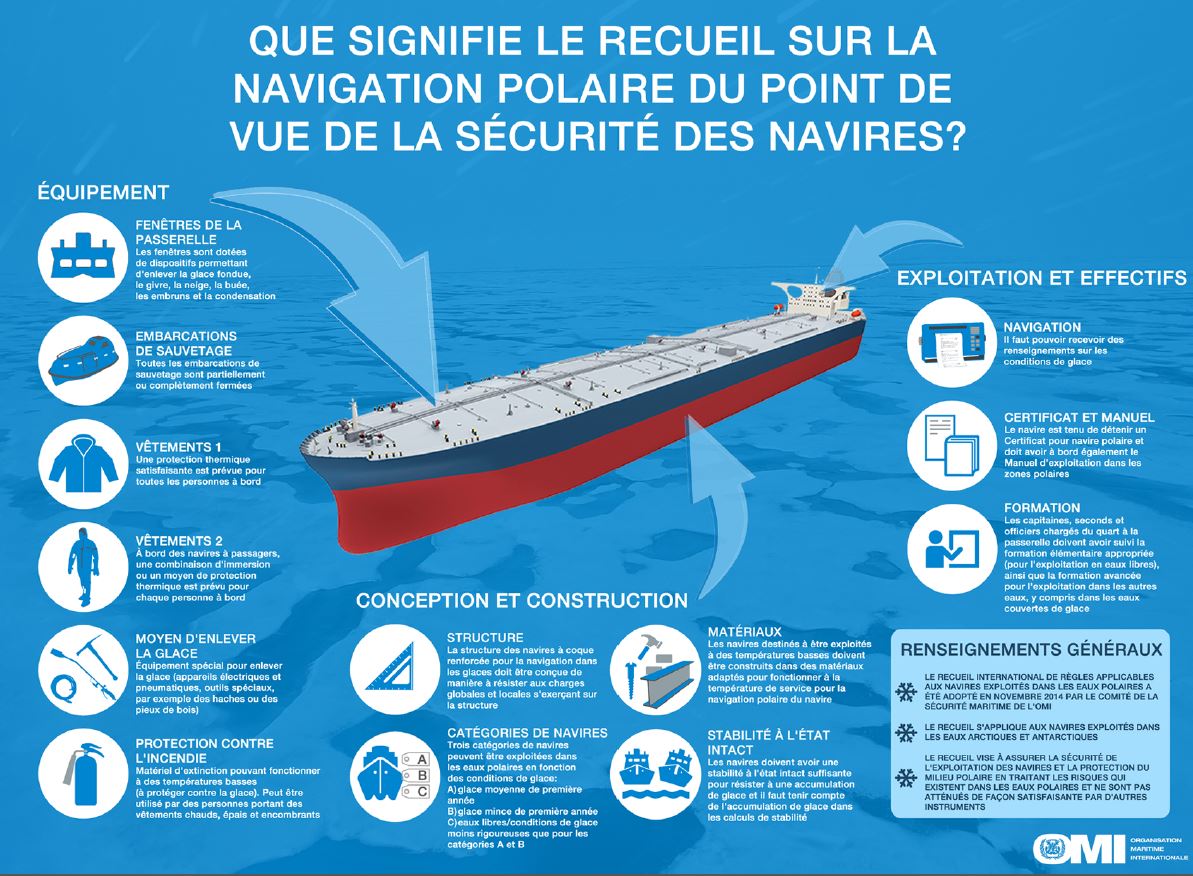 If the Polar Code leaves the opportunity to the vessels already built to comply with structural requirements concerning safety (SOLAS measures) until 1 January 2018, the measures dealing with the environment are applicable from 1 January 2017. A new chapter XIV of the SOLAS convention “Safety measures for vessels operating in polar waters” defines all the safety requirements to be met for the ships operated in polar zones, measures for both crew members and the operation of the vessel in low temperature. The MARPOL convention annexes, Annex I (prevention of pollution by oil); Annex II (prevention of pollution by noxious liquid substances in bulk); Annex IV (prevention of pollution by sewage); Annex V (prevention of pollution by garbage) were completed to extend the restrictions for the disposal of sewage and garbage near the ice (figure 5). All hydrocarbon discharge is forbidden. Heavy hydrocarbons have been forbidden since August 2011 in Antarctica but vessels are encouraged not to use or transport heavy hydrocarbons in the Arctic. A heavy hydrocarbon pollution in cold waters would be a disaster for the ecosystem and their complete ban is at the heart of discussions at the IMO and within representative authorities of the Arctic countries to eventually ban their use. 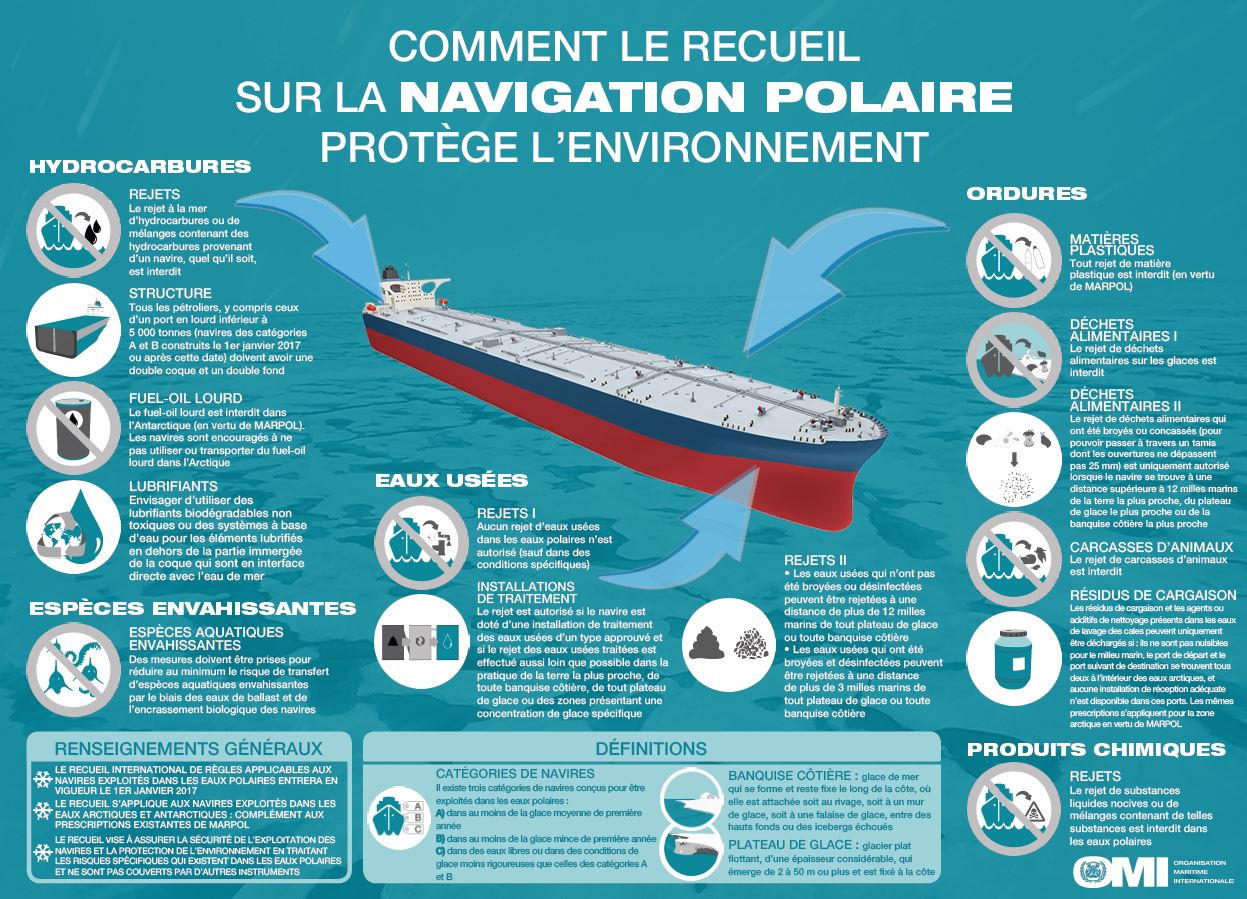 Chapter 12 of the Polar Code, “Personnel competences and training”, brings about amendments to the convention and to the STCW Code. Chapter I, “Generals” and chapter V, “Special required training for personnel onboard certain types of vessels” have been amended and will enter into force in July 2018. Two levels of mandatory qualification are required onboard ships operated in polar zones, a Basic certificate and an Advanced one. The minimum mandatory requirement is the Basic training for all deck watchkeeping officers. The captain and the chief officer must hold the Advanced certificate. These certificates are obtained after a dedicated thirty-hour training course in a centre approved by the Administration. Captains and chief officers, candidates to the Advanced certificate, must have carried out an approved sea service of a two-month duration, at least, as officer in charge of the watch at sea. For the companies which operate ships in an irregular manner in polar waters, the Basic required qualification for all deck officers need the initial training. However, the captain and chief officer who must hold the Advanced training certificate but who cannot prove their two months at sea of employment in the Basic functions to pretend to the Advanced training, will have to use the services of one or a few ice pilots for the whole duration of the presence of their ship in polar waters.

These certificates have been required since January 2017, even if the STCW amendments will enter into force only in July 2018. While waiting for their entry into force, transitional measures will be implemented by the Administration for the officers who will be able to pretend by validation of their sea time to the delivery of the Basic and/or Advanced certificates.

The ENSM, in partnership with the Ponant Company, has offered since September 2013 trainings for ice navigation on the Marseille campus, thanks to a dedicated module on its manoeuvring simulator (figure 6). Since January 2017, the centre has been able to deliver the Basic training course up to the IMO standards for companies who ask for it. The Administration, very reactive on this matter, will be able to publish the decree which defines the deck officers training at the same time as the adoption by the IMO of the Model courses for the Basic and Advanced trainings which should be adopted at the next HTW session next February.

Maritime Education lecturer, Hervé Baudu teaches Navigation and Manoeuvring at the ENSM, on the Marseille campus. He has taken part in the working group on the writing of the IMO Model courses for the Basic and Advanced training courses for ships operated in polar zones. He was the working group rapporteur at the HTW plenary session at the London IMO at the beginning of February 2017. He is in charge of the ice navigation training courses at the ENSM delivered in part on a dedicated simulator.

He is the author of many books, one on Manoeuvring translated into English and another one on the COLREGS.
Hervé Baudu is a member of the Marine Academy.