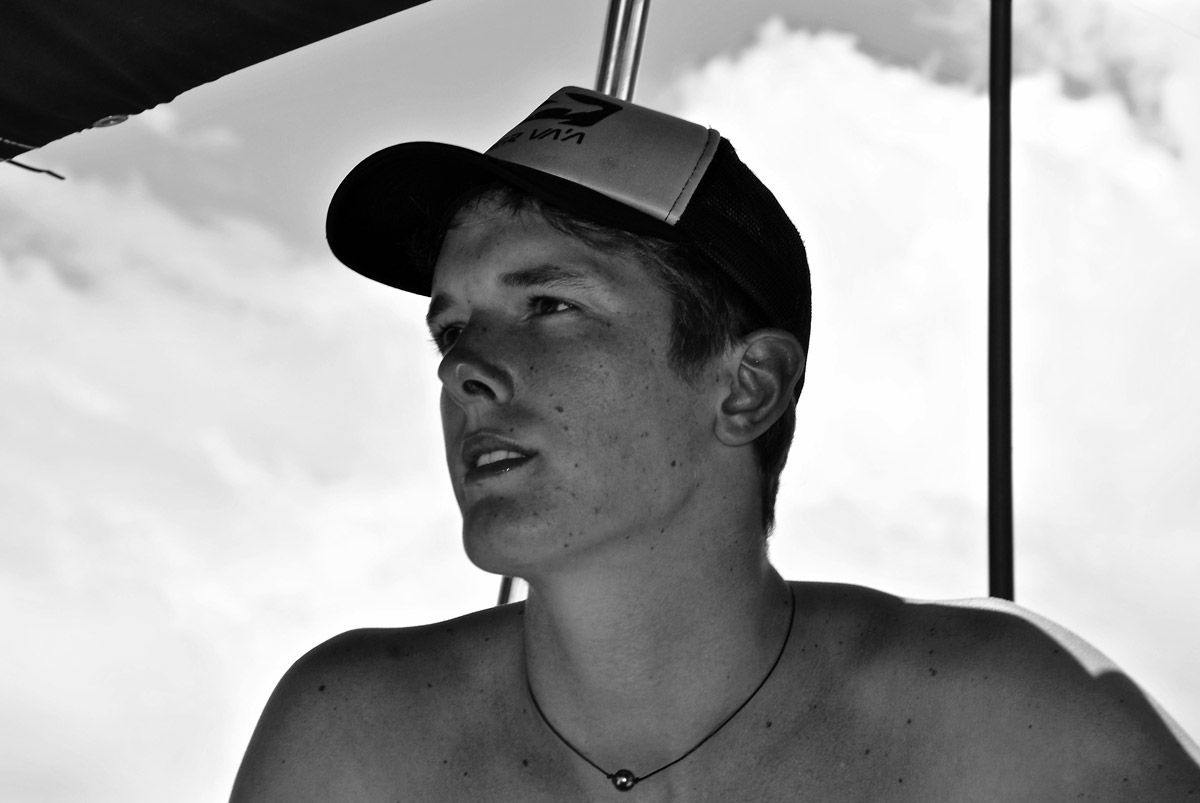 «I am from Tahiti, from Arue. I went to Lamennais high-school, the largest high-school in Tahiti, located in the capital, Papeete. My parents have lived in Tahiti for 25 years.
I have always lived within the maritime world, from a very young age. I’ve lived on a sailing boat since the age of six and I started sailing at four. As I wanted to do a job linked to the sea, friends of my parents, who had studied at the « Hydro,  told me about the ENSM. The skippers from the marina told me that if I had the opportunity to study at this school, it was the best thing to do for what I wanted to do in the future.

I therefore concentrated all my efforts on the ENSM and didn’t take any other competitive exams.

Today, I’m in first year. I’m doing well for the moment without having done a preparatory class. It’s just a question of getting used to the work pace. I went back home in December to visit my family and I will see them again in June as I will sign on a vessel in French Polynesia, the Aranui.

During the holidays, I either visit friends from Tahiti who are studying in France or my grand-parents.I spend my weekends with friends from school. I haven’t met any specific issues yet and I was very satisfied with the way I was welcomed.
If there’s one thing I can tell high-school pupils, it’s to set off on the adventure ! This school leads to great jobs, the programme is very interesting and the atmosphere is awesome.»

«I spent my youth in Polynesia where I arrived when I was 5. My parents are still there and I go back every summer. I grew up on the seaside with this attraction for adventure and discovery.

I really discovered the maritime world when I went back after my first year in Maths Sup in France. The father of a friend who is pilot in Tahiti gave me the opportunity to discover the incredible world of the merchant navy. He took me on board vessels and explained his fabulous job.

After a preparatory class in the Rimains in Saint-Malo, I joined the Marseille campus in 2013.

I spent three wonderful years, from theory classes, practicals and above all to times on board. I was lucky in the course of my first three years to board VLCCs from Euronav. Cadetships are the key periods where we really get in touch with the job. We get the real feeling of the ships, the atmosphere so particular to the shipboard, of the work, of the encounters with other nationalities and of the maritime adventure.

After these three years, I had the opportunity to carry on my training by integrating the new maritime engineering programmes. This choice was finalized by the will to remain in the maritime world but being also an actor of renewable marine energies. It is obvious that it is a sector with a future and for me it is mandatory that the”marmar” (merchant navy officers and crew) be present in the changes operating at the moment, because it is true that nobody loves the sea as we do.

I’m keen on motivating young people to discover this world which is unfortunately not known enough. The merchant navy offers possibilities that few higher education Academies and Colleges offer, and above all, opens the mind and
gives you the opportunity to gain knowledge in a large number of sectors.
Don’t hesitate to take the plunge, you will live adventures that your relatives have dreamt of and will leave permanent traces. The future of the maritime world is yours!»

«In 2000, I joined the Marseille campus at Pointe Rouge for my freshman year. Anecdotally,I did two first years as student life in such a lovely city and such a brotherhood spirit among the students cannot let a young Polynesian impervious!

I did the two first years as a boarder. It was the last years for this type of accommodation within the school.
As I had some family in France, I spent my holidays with them but also with some of my classmates. The Marseille campus is now equipped with student accommodation near the school which allows the students to remain in Marseille when the school is closed.
This is quite a good system to maintain a kind of osmosis between the students and the teachers through the sports field and the school’s park.

As far as I’m concerned and according to the experience I had with my overseas schoolmates or from Corsica,our integration within the school went well because our training took place within the school and with teachers who were former seamen. The school’s head teachers came from the same sector. In fact, a management team who fought so that the school kept its school spirit and not a university spirit.

I was lucky to study within the old system: 2000 to 2004, first year to third year and in 2007, my final year (DESMM). I encourage our future overseas pupils to come to France and to sail abroad before going “home”to work for our local shipowners and to get them to use our experience and knowledge. To allow this job to remain one of the most beautiful jobs in the world, to get the French and overseas officers to remain well-known on all the oceans».

Becoming an officer of the merchant navy

Registration for initial training is on Parcoursup. The information concerning the recruitment and the calendar will be detailed there.

ENSM’s students are eligible for grants.